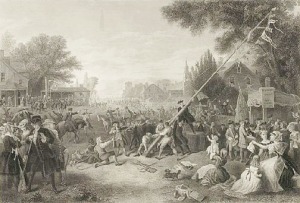 It’s that time of year. Fireworks are erupting overhead as Americans celebrate Independence Day. I must confess it is rather special to be spending this years July 4th in one of the thirteen original colonies (Georgia). Two days ago, on July 2nd, I walked past the Savannah Court House where the first “Liberty Pole” in Georgia was erected on June 5, 1775. I just remember thinking at the time….not many people know that independence from Britain was declared this day.

It is true that most Americans do not realize that the Continental Congress declared independence from the British Empire on July 2nd, rather than July 4th. Why is that important? The action and not the formality took place on the 2nd. This is when the founders cast their vote for independence. John Adams knew the importance of the 2nd, writing his wife Abigail:

The second day of July, 1776, will be the most memorable epoch in the history of America. I am apt to believe that it will be celebrated by succeeding generations as the great anniversary festival. It ought to be commemorated as the day of deliverance, by solemn acts of devotion to God Almighty. It ought to be solemnized with pomp and parade, with shows, games, sports, guns, bells, bonfires, and illuminations, from one end of this continent to the other, from this time forward forever more.

Americans however, do not celebrate on the 2nd. Turns out, Adams was off by two days. Fireworks, cookouts, and gratuitous amounts of beer are displayed on the the 4th rather than the 2nd. Why is this? Well, it just so happens that Congress adopted the Declaration of Independence on the 4th, two days after declaring independence. Today, interestingly enough, we celebrate the paperwork of the founders. It is odd how formalities took precedent over actions. Granted, if you are going to celebrate a document…..the DOI is a reasonable choice.

For your viewing pleasure:

And Just for kicks, check out Ubisoft’s interpretation of American Independence in their new Assassins Creed III Trailer.